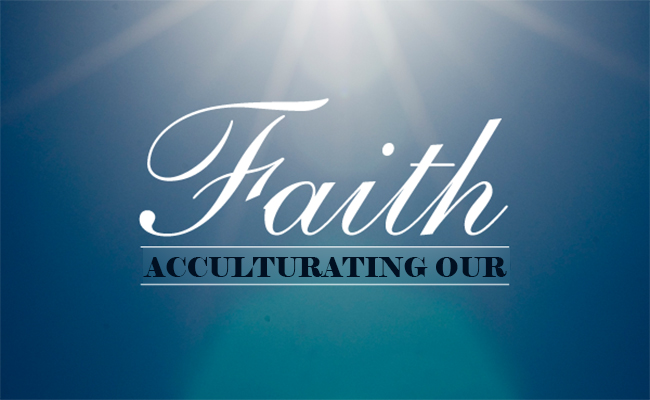 There have been frustratingly many definitions of  culture,  but  perhaps  in  distilling  all  those meanings  we  can  say  that  culture  is  the behavioural and cognitive patterns generated from  the  interactions  between  a  society’s  beliefs  and its  environment.  This  environment  could  include  such things as the physical, social, ethnic or historical conditions that influence society.

Culture    determines    our    instinctive behaviour  by  giving  functional  expressions  to  our  beliefs  and  values  and  it functions  as  the  context  within  which we think and act. In this way it makes it  comfortable  for  us  to  live  our  lives in  accordance  with  our  beliefs  in  a particular  subjective  or objective  environment.

Thus,   as   the   environment   changes, culture  must  change  too  in  order  to re-establish   that  harmony   between beliefs,  behaviour  and  that  particular environment.

For  Muslim  communities  in  the  West the issue of the cultural status of Islam is pivotal in deciding how Muslims deal with  their  environment  and  the  extent to which non Muslims accept Islam as an indigenous religion.

The  Islamic  world  consists of  many  diverse  cultural practices  subsumed  under one  Islamic  culture  spanning  a  wide  multi-ethnic domain     that     includes Africa, Asia, and even parts of  Europe.  Many  scholars have  divided  the  cultural zones  that  comprise  the Muslim   world,   into   the Arabic,   Persian,   Turkish, African,   Indo   Pakistani   and   Malay, all  of  which  while  being  Islamic,  have strikingly varied cultural expressions of Islam.

When it comes into contact with other cultures, Islam has a threefold reaction. It condones forces and ideas that agree with it, such as the belief in one transcendent God, life after death, marriage as the only legitimate context for sexual relations,  etc.  Secondly,  it  reinterprets and appropriates other aspects of that culture that do not contradict the principles of Islam but are peculiar to that society  and  finally  rejects  those  ideas and  cultural  forms  that  contradict  its principles, doctrines and morality.

This  process  of  acculturation,  appropriating what is in conformity with the Islamic ethos and rejecting what is not, began in Arabia itself with the spread of Islam in the Arabian Peninsula. There, certain  pre-Islamic  cultural  practices and  attitudes,  such  as  certain  types of  pre-Islamic  dress  like  the  turban and  the  cloak  or  abaya,  and  cultural attitudes  such  as  the  Arab  custom  of generosity to the stranger were incorporated within the local Islamic practice.

This  process  was  followed  wherever Islam  had  a  foothold  or  became  the dominant   religion.   The   synthesising process  of  confirmation,  modification, incorporation   and   proscription   led to  the  emergence  of  different  Muslim cultures  unified  by  an  ever  pervasive universal  set  of Islamic  practices  and values.  In  these  cultures,  Islamic  principles  and  the  Prophetic  traditions  as sources  of  divine  grace  dominate,  but each  cultural  group  has  the  freedom to  realise  its own  cultural  possibilities within the tradition of Islam itself.

Among    the    different    factors    that play  a  central  role  in  this  synthesis  is language, which is the outward expression  of  the  intellectual  genius  of  a people. Language  also  had  a  powerful effect in building bridges between Islam and local cultures. In many parts of the Muslim  world  the  interaction  between Islam  and  these  cultures  has  resulted in  the  creation  of  hybrid  languages, such  as  Swahili,  Hausa  and  Urdu  that are mixtures of the local languages and Arabic. To be a knowledgeable Muslim in  these  societies  knowledge  of  Arabic and  fluency  in  these  hybrid  languages are   all   required.   These   languages played a crucial role in making Islam a religion familiar to the local people and contributed  significantly  to  its  spread among these people.

Chinese  Islam  for  example,  has  been articulated in terms of Chinese civilisation and thoughts. The name of Islam, for  example,  translated  into  Mandarin is  Qïng  Zhën  Jiao,  which  means,  “The Religion  of  the  Pure  and  the  Real” in  place  of  the  word  “Islam”  which  in their pictorial script and speech would have  been  alien  and  meaningless  to the people of the area. It thus made a connection  between  the  religion  and the intellectual and philosophical environment integrating it with the culture of the Chinese.

Thus  in  each  area  one  would  find variations  in  the  cultural  expressions and  manifestations  of  Islam  such  as differences in architectural styles, local costume,   in   ceremonies   commemorating  rites  of  passage  such  as  births, weddings   and   funerals.   From   place to  place  some  aspects  of  the  sunnah (inspired     Prophetic     practice)     are observed,  neglected,  or  even  opposed in cultures  where  such a   practice   is   at   variance    with    embedded psychological   attitudes. Even  Islamic  law  recognises  cultural  diversity. Through the concept of ‘urf’  or  customary  practice,   it   accommodates local  culture  by  making rulings  that  incorporate a wide range of behaviour that translate Islamic   rules   into   action.   Although less  authoritative  than  other  sources of  law  and  subject  to  criticism  and modification, nevertheless, the concept of  ‘urf’  is  very  important,  for  through it  Islamic  law  considers  and  validates local customs and requires Muslims to conform to them.

In terms of its integration into Western culture  and  its  “naturalisation”,  Islam in  the  West displays  both  a  cultural incongruence  –  hence  alienation  from its  surroundings  –  as  well  as  trends towards “indigenousness”.

There are many indications of cultural incongruity,  most  important  of which is  the  domination  of  immigrant  ethnic attitudes over western nationality. This is  the  source  of  the  vast  majority  of our community’s ills, from our inability to  influence  our  society  to  our  lack  of unity and social cohesion. Almost all of the  institutions,  centres  and  mosques that  we  build  are  constructed  more to  satisfy  this  ethnic  need  to  feel  at home  or  more  accurately,  to  recreate the  familiarity  of  the  mother  country outside  the  homeland  than  to  reflect and aid our integration in our adopted countries.  Thus  we  end  up  not  being able  to  politically  and economically manoeuvre successfully as a community in our new environment despite the fact that we have a large number of professionals  among  us  as  well  as  growing individual wealth.

This alienation has come to be reflected in  an  ideology  that  sees  Islam  as  a monolithic  culture  narrowly  defined  in a literalistic application of the practice of the Prophet. Whatever practice that is at variance with the outward form of the  Prophetic  practice  is  not  seen  as Islamic. The argument of those who hold this view is that since Islam is a superior religion and culture, all other religions and  cultures  must  be  eliminated  and only  Islamic  culture,  as  a  rigid  set  of formal   behaviours   precisely   defined, should  remain.  Not  only  is  this  school of  thought  hostile  to  their  country  of residence which they determine as the land  of  the  infidels,  but  it  is  equally hostile toward understandings of Islam that are at variance with their own.

It  is  interesting  that  right-wing  nationalist  Islamophobes  in  these  countries have the same uncompromising idea of Islam  as  the  media  stereotypes  which stem from this alienation. This type of opinion  has  given  impetus  to  the  idea of  Islam  as  a  monolithic  culture  that is  incompatible  with  the  Western  way of  life  and  which  must  be  reformed  in order  to  coexist  with  western  society. According  to  the  proponents  of  this view,  Islam  should  exist  only  as  a  set of personal beliefs without any outward manifestation.

The  other,  more  positive,  trend  is  the growth of a thriving Muslim subculture, grounded  in  the  western  environment and  proud  of  its  Islamic  heritage  and practice.  This  culture  is  expressed  in many forms, from stand-up comedy, to the  writing  of  penetrating  books  and articles   on   Islam   from   perspectives peculiar to the intellectual environment of the West.

It  would  take  too  long  for  an  indigenous   Islamic   society   and   culture to  occur  naturally,  but the  process could  be  assisted.  For  this  to  occur,  it requires  a  shift  in  our  understanding of   the   meaning   of   Islamic   culture and  our  attitudes  to  the  host  country. It  also  requires  the  development  of local  scholars  and  intellectuals  with  a profound  knowledge  of  the  history  of Islam, the humanities and culture. They should be completely familiar with the eternal  principles  of  Islam  and  how  to apply  them  to  the  immediate  environment  using  as  a  base,  the  attitudes, beliefs and behaviours that are compatible with the Islamic ethos.

This article was originally published in Islam Today magazine.